No Matter Who You are or where you are on life's journey, YOU are welcome here!

where we are now 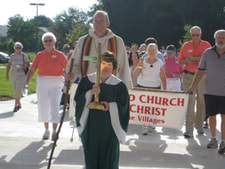 The UCC at The Villages entered its new building on CR 101 on August 15, 2010.  Festivities began with a kadimah,  or pilgrimage, in the tradition of its original host, Temple Shalom, which provided worship space to us for three years.  When members of Temple Shalom moved to their current location, they carried their Torah for more than four miles.  In that spirit, we carried our Bible, chalice and cross nearly a mile down the same road, starting at Temple Shalom, where our Jewish friends sounded the shofar (ceremonial ram's horn) and sang farewell.  Members of the congregation and their guests celebrated the first service in our new home, including Holy Communion and an inclusive Agape fest..

IT STARTED VERY LONG AGO
The UCC traces its roots back to very early Christian movements to proclaim the good news based on biblical truths led by the Spirit of God.  While we are one of the youngest American denominations, our background also makes us one of the oldest in Protestantism.
Our story begins with our origins in the small community who followed Jesus 20 centuries ago and continues to the present.  We come from the Reformation - a protest movement against the abuse of authority by church leaders and the rediscovery of Luther and Calvin of the Bible's teaching that salvation is not earned, but is a gift.  Our history traces the epic journey of the Pilgrims from England to the shores of North America; the waves of emigration by German and Hungarian Protestants seeking spiritual and political freedom; and the beginning of the first Christian anti-slavery movement in history.  During the 20th century, a movement reunited the divided branches of Christ's church, and, as a result of that movement, the union of several traditions of Protestant Christianity combined into the United Church of Christ in 1957.  (resources & excerpts:  www.ucc.org)

"Never place a period where God has placed a comma."
We're not a perfect church, but we do try to be faithful.  We are known for arriving early on issues of inclusivity and justice.
We were the first to ordain:


And the first to:
2005:  affirm same-gender marriage equality.

We believe faith requires tenderness and courage, a big kind of love that is committed to changing people's lives - in our churches, but also in the world around us.  We call it religion with relevance.

No matter who you are OR where you are on life's journey....You Are Welcome Here!

"Extravagant welcome and hospitality were central to Jesus' ministry and teaching.  Indeed, Jesus welcomed and was welcomed by many who were not welcomed by others or the religious community." (David Schoen, UCC.org)

God's communion table is open, not closed, and God's gift and claim in baptism are irrevocable.  We advocate justice for all.
Our congregations extend hospitality as a sign of God's inclusive love.  Our perspective is global, not provincial.  We work with - not against - people of other faiths.  Why?  Because God is still speaking.

Because we believe that God is still speaking and that His Word is still relevant we will be:
Copyright © 2015